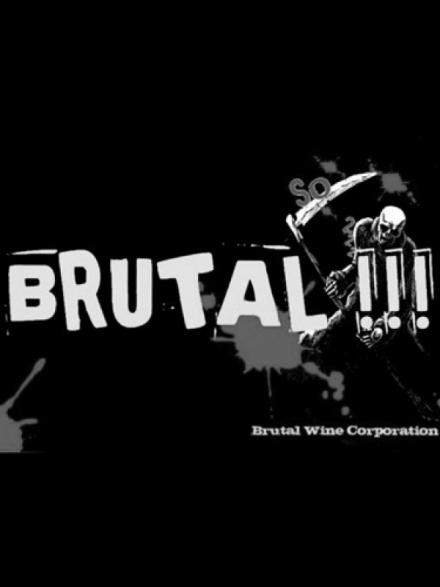 If you don’t know the story behind the coveted Brutal!!!, don’t worry. You’re in good company. Even the most ardent natural wine collectors, modern Instagram wine gurus and carbo-slinging sommeliers couldn’t accurately explain its origin.

Trevor Kellogg, who presides over the Lower East Side’s Discovery Wines and often stocks what he can get, told me most people are misinformed, “I’d say one of the most common misconceptions from new customers is that Brutal is a producer—‘I love his wines!’”

The rumors surrounding Brutal!!! are as strong as those about what killed Catherine the Great (no, it wasn’t the horse). Among them are that it is a ‘his’ (whomever made the particular bottle), that it is a ‘they’ (owned by Bar Brutal in Barcelona) and that it is an ‘it’ (a label for fucked up wine). But as with the Catherine rumor, it’s not what you might expect. She actually died of a stroke in her bathroom. The correct answer to what is behind the Brutal!!! label is that it is an ideal, born of friendship, cooked up after a long, sodden day and night.

The year was 2010. The dashing Sune Rosforth of the Copenhagen-based wine importer Rosforth & Rosforth and his business partner Henrik Sehested were in the south of France to taste. With them were Catalunyan winemakers Joan Ramon Escoda and Laureano Serres. Professionals Henrik and Sune knew what they were in for, especially as no one was spitting.

The first stop was Remi Pujol’s domaine, Le Temps Fait Tout. Remi said that at each tank Laureano and Joan Ramon chorused “es brutal” at each other. Laureno flung his arms out like a bat and screamed, “Brutal!!!” and Joan Roman met him at the same decibel. The day was packed with brutals!!!

“I thought this was a response to tasting raw wines,” Remi wrote to me. “That’s when you need a lot of imagination to project how the wine would evolve.” He thought they thought the wines sucked.

From there they headed to Antony Tortul’s La Sorga and drank for hours. There was more “Es brutal!!!” The French men kept on sending each other looks of ‘are these guys for real?’ Dinner was at Octopus in Béziers. It was there that Antony and Remi confronted their Catalunyan friends. “All afternoon you were tasting and yelling ‘Brutal!!! Brutal!!!’ You don’t like our wines?”

Laureano realized something was lost in the translation. He explained that he meant “énorme” or “super-bon.” His “brutal” had nothing to do with violence or unpleasantness. It was exactly the opposite.

After dinner they returned to Tortul’s for the night. Conversation—and without a doubt, drinking—continued. All surveyed had a slightly different version of what happened next. Henrik swears he was the soberest, and says he and Sune were already horizontal. “At the the end of our beds the others were agreeing on this new project. They said that  Vin Naturel was now too common, it was used by too many winemakers and people in general, that we need a ‘new wine’, something extra. Since everything that is cool, pretty and extraordinary is BRUTAL, we should call it Brutal.”

Antony headed to his computer and mocked up the artwork that would celebrate wine, anarchy and love. The label was bold, black, red and yellow, with a sulfur enmeshed grim reaper lurking in the background.

For as drunk as they were, they were clear-headed enough to decide that a wine bearing this Brutal Wine Corporation label needed to meet some requirements:

The wine had to be zero/zero, no input in the vineyard and none in the cellar. But the concept was far more complex than simply no added sulfur. The maximum production was one small barrel or 200 bottles. And there was more. Laureano tried to explain it to me as best he could, “The wine should be bottled with some sort of technical fault. But that fault is part of the wine’s beauty and should get better as time goes on.”

So to untangle his meaning, the wine should have some sort of technical flaw by conventional standards, yet in the end it would become part of the wine’s beauty. Most importantly, Laureano added, anyone in the world could request and be given the label. It was for the world to use, but only if they made a wine from the heart.

But, how long could such an ideal last?